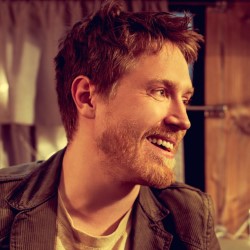 Story telling comedian Angus Dunican returns to The Counting House Edinburgh to tell us about masquerading as a functional person, tie in novelisations, robots and discovering you were sexy all along.

Angus bounces into a packed room, full of repressed energy. He seems excited to be here. His show starts with some basic admin that he has crafted into a funny introduction that gets everyone laughing. He prepares us for what is to come by telling us he’s first and foremost a storyteller and warns us that we may find this a bit different from conventional stand up. He lets us know that he tends to the wordy and that there will be cues to bring him back on track. Cleverly, he has sold us a pitch and we’ve happily bought into it.

The wordiness is clear from the off, he’s a writer and raconteur. His use of language reflects an ability to construct and manipulate narrative, to paint pictures and build anecdotes to a delayed ending with a nice pay off. Our host sits in a halfway house between storyteller and stand up, which serves to give his comedy some depth.

The stand-up elements become clear when he makes jokes at his own and others expense. This brings the audience along by making them laugh as he tells the story. Even though the jokes are funny, there is an underpinning of sadness to many of them. They seem to be personal revelations, though they are never mawkish.

Angus is clearly a clever writer both articulate and complex. He’s also a nerd, something that was problematic in his early years but which now fuels his comedy. The set is littered with culturally relevant references, such as lines from iconic movies. The inclusion of thoughts and ideas from psychology, science and philosophy are well thought out. We examine existential angst and what it means to be human. Additionally, Angus is not afraid to acknowledge his own tendency to pretentiousness.

All of this suggests that his comedy is highbrow, but it never becomes unintelligible or lost. There are counterpoints in the performance with earthier and more ‘low end’ gags and these provide an entertaining contrast.

Not everyone is going to get all the gags, something he acknowledges, and has developed a neat way of dealing with. A kind of running back up gag whose usage can vary depending on how the show goes. It works well.

Stories are embellished with a wide range of voices and characters and they are never more touching when Angus talks about his own internal monologue with its own distinctive accent. There are some impressive vocal skills on display. Through manipulation of volume, tone and accent or characterisation or impersonation it adds a dynamism to the story telling. He addresses perceptions about his accent, ending it with a brilliantly vivid gag, which if it weren’t so rude would be serious contender for joke of the fringe.

Comedy at Edinburgh comes in a variety of different forms. In this case we have a clever articulate and funny storyteller. Angus is a bit different in the way that brainy, slightly nerdy introverts can be but most importantly he is funny. His is a good show and it’s definitely recommended.